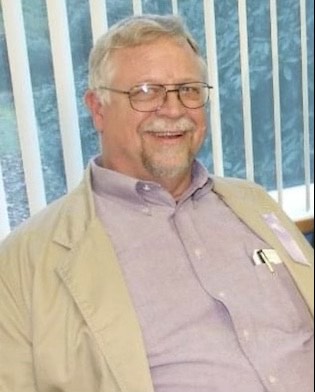 Robert Neil Countryman departed this world on May 15, 2022. He was born on February 12, 1947, in Walla Walla, Washington. The son of a Methodist minister, he moved frequently with his father, mother, and two brothers.

After earning his bachelor’s degree from Puget Sound University, he went on to achieve his master’s in theatre and set design at Wayne State University. Eventually settling in Pickens County, he and his wife Emily purchased a farm on the west end of the county. Together they raised 10 children and more animals than anyone can count.

A lifelong Methodist, Bob could be found on Sunday mornings at JUMC, “making a joyful noise” which he would describe as “well, certainly a noise”. During the months preceding his death, he would watch services from his laptop.

One of Bob’s fondest hopes was achieved in February 2011, when Tater patch Player purchased the building that is now a theatre located at 95 Philadelphia Lane in Jasper, Georgia. The transformation was inspired by the leadership and guidance of then Tater Patch President, Bob.

A true Renaissance man (previously a hippy), and an artist, he would use his voice, imagination and technical knowledge to bring stories to life. Bob was a consummate teacher with a quick wit, a deep laugh and a mischievous grin.

Bob made a career first as a homebuilder, having designed and constructed many homes in Lake Arrowhead then transitioned in home inspection. The final years before retirement, he taught technical theatre at North Forsyth High School. When he wasn’t working, he was active in the church’s UMM group, as well as the local beekeeping society.

Robert was preceded in death by his father Reverend Kenneth Countryman, and his mother, Edith Allen Countryman. He is deeply mourned by his wife Emily, his children Tracey, Travis(Star), Christin, Janet, Miriam, Daniel, Emmanuel, Edith, Hannah and Ellie; his brothers and their wives, Kenneth(Marcia), John(Laurie); and his grandchildren Aspen and Andie Countryman, Katie and Wesley Houck, Anthony Countryman and Silas Evans.

A lifetime student of Shakespeare, one of his favorite lines from Hamlet now seems fitting;